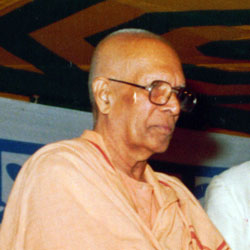 Born in a village near Trichur, in Kerala. Joined the Mysore centre of Ramakrishna Order as a Brahmachari in 1926. Served as President of the Karachi centre of math from 1942 to 1948 until the partition of India. Thereafter, served various centres in different capacities at Delhi, Kolkata and Hyderabad.

Was elected as President of the Mission.

Declined the Padma Vibhushan as it was conferred on him in his individual capacity and not for the Mission. Accepted the Indira Gandhi Award for National Integration in 1987 and the Gandhi Peace Prize in February 1999 as both were conferred on the Ramakrishna Mission.

Has been a popular teacher and lecturer on Indian spiritual culture. Considered an authority on practical Vedanta. Made annual lecture tours to Western Europe, the United States, Australia, Singapore, Iran and Soviet Union. Noted for his contributions that bridges Western science and Vedantic spirituality. Authored over 50 books - Eternal values for a changing society and commentaries on the messages of the Bhagavad Gita and Upanishads being the famous ones.