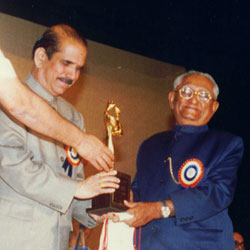 Conducted over 1500 field trials in several representative villages in different agro-climatic zones of the State on principal field crops. Evolved effective schedules of calendar-wise pest management practices for these crops, which were instrumental in reducing the pest menace and in a three-fold increase in the yield. Is responsible for arid horticulture in the drought prone Bijapur Dist.

Motivated the rural youth and women to establish clubs and mahila mandals in their villages to take up community works voluntarily.

Established Horticultural and Plantation Gardens and Propagated and Disseminated multi-storeyed Cropping Technology i.e. growing more than 3 crops in a year in the same land.

Is a Life Member of the Institute of Agricultural Technologies of India among other important positions held by him.

Received the ‘Rajyothsava' Award in 1993 from the Government of Karnataka.