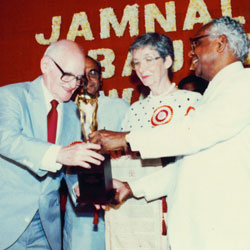 Focussed work on three major themes- defense of human rights, disarmament & abolition of nuclear weapons, and inter-religious cooperation. Among the founders of the Congress of Racial Equality (CORE) for using Gandhian methods to lessen racial segregation. Was involved in the American civil rights movement with Dr. Martin Luther King Jr.. Was also instrumental in in the adoption by the U.N. General Assembly of the Declaration on the Elimination of All Forms of Intolerance & of Discrimination based on Religion or Belief.