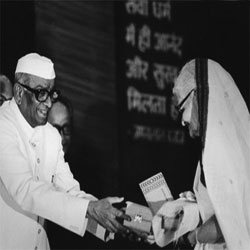 Born in 1901 in England as Catherine Mary Heilemann. Adopted the name of Sarala Devi after she came to India and settled down here in 1932. During the last four decades she has devoted herself to the service of the poor and the downtrodden in her country of adoption, and has become a symbol of service and sacrifice.

Traumatized immensely by the First World War in 1914, although still a girl. Appalled by the mass murders committed by man on man in the name of patriotism. The War also affected her personal life profoundly. Members of the Heilemann family suffered ostracism. As a result, became a rebel against society as a whole.

Heard for the first time about Mahatma Gandhi in 1927. Was greatly attracted by his philosophy of life and wished to join him. Got an opportunity to come to India in 1932 to serve as a teacher in Udaipur. Later went to Wardha at the invitation of Shri Jamnalal Bajaj. It was here that she found work after her own heart- to serve the poorest, the loneliest and the lost. But the climate did not suit her.

In 1941, Gandhiji advised her to go to Almora for a rest where she got involved in the Quit India Movement. Suffered two terms of imprisonment for disobeying an internment order.

In 1946, established the Kasturba Mahila Utthan Mandal at Kausani, an institution designed to help the poor, ignorant, backward and oppresses women of the Kumaon, Garhwal and other mountain districts of Uttar Pradesh. The aim was to create a sense of self-confidence in them by making them self-supporting and self-reliant. Also established the Lakshmi Ashram at Kausani, a residential basic school for girls, where they were taught through the crafts of agriculture, dairying and wool-spinning and weaving.

In 1966, decided to move on to newer fields of work. Felt that a new approach was needed to tackle the country's present problems. For ten years, traveled on foot or otherwise in many parts of the country, mainly in Bihar, Madhya Pradesh and Karnataka, continuing her efforts for Vyapak Lok Shikshan, propagating her views. Also spent one year in the dacoit-infested areas of Chambal Valley and Morena, working for a change of heart among the dacoits and trying to persuade them to surrender themselves.

Intended to settle down in the South, but the affection of the people of Uttarakhand, who built a house for her at Dharamghar village in Pithoragarh district and invited her to come and settle down there, called her back to her old scene of activities.