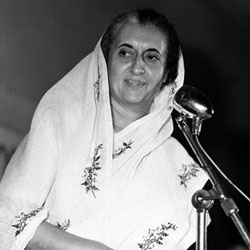 Daughter of Jawaharlal Nehru. Returning to India from Oxford in 1941, became involved in the Indian Independence movement.

In the 1950s, served her father unofficially as a personal assistant during his tenure as the first Prime Minister of India. Became President of Indian National Congress. A member of the Rajya Sabha after Nehru's death in 1964. Joined Lal Bahadur Shastri's cabinet as Minister of Information and Broadcasting.

Became the Prime Minister after the sudden demise of Shastri. Initiated left-wing policies like nationalisation of banks. Started the national nuclear program. With a successful underground nuclear test near the desert village of Pokhran in Rajasthan, India became the world's youngest nuclear power.

Other highlights of her tenure - "Green Revolution" (achieving self sufficiency in food grains through agricultural reforms) and “White Revolution” (an expansion in milk production to combat malnutrition).

A decisive victory in the 1971 war with Pakistan. Imposed a state of emergency in 1975. Assassinated by her own bodyguards in 1984.