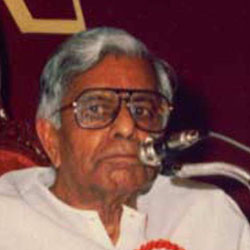 Born at Pollachi in Coimbatore District of Tamil Nadu to an agricultural family. Received early education at Pollachi and higher education in Madras. Secured his law degree from the University of Madras in 1932, but could set up legal practice at Coimbatore only in 1936. Got involved in the freedom movement. Suffered imprisonments.

An institution-builder — the Institute of Mathematical Sciences and the Madras Institute of Development Studies owe their inception to his encouragement and support.

Had been closely associated with Bharatiya Vidya Bhavan. Was its President and Chairman, Bhavan International.

Was elected Member of the Constituent Assembly of India in 1946 and was a member of the Provisional Parliament till 1952 Then became a Member of the Tamil Nadu State Cabinet. Held various portfolios at varioue times - Finance, Education and Law.

Assumed the office of the Governor of Maharashtra in 1990. Was conferred the Bharat Ratna in 1998.