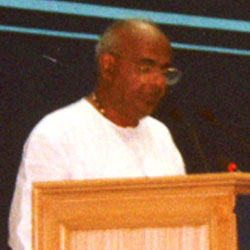 A Civil Engineering Diploma holder, started as a small time contractor. Plunged into active politics at an early age. Starting from lower strata of the democratic set-up, ascended the political rungs gradually.

When just 28 years old, the youthful Gowda contested as an Independent and was a runaway success from day one when he first became a member of the Karnataka Legislative Assembly in 1962. Leader of Opposition in the Assembly for five years.Served as the Minister of Public Works and Irrigation.

A crusader for freedom and equality. Suffered imprisonment during the days of emergency.

Elected to the Lok Sabha in 1991.Became the President of Janta Party twice at State level and President of State Janata Dal in 1994.

In1994, assumed office as the Chief Minister of Karnataka.

Affectionately called the 'son of the soil' , he has proved to be one of the most ardent supporters of liberalisation with a human face.

Resigned as the Chief Minister of Karnataka in1996 to be sworn in as the Prime Minister of India.