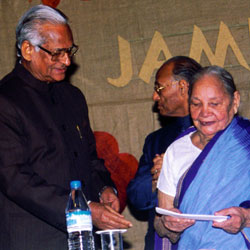 Participated in the Quit India Movement. Suffered imprisonment. Has been a social- change worker on Gandhian lines. Co-founder of Atheist Centre (1940).Has been in the forefront for the eradication of untouchability and the caste system. Guided the Atheist Centre for a broad spectrum of activities through its three major organisations – Vasvaya Mahila Mandal, Arthik Samata Mandal and Samskar – for comprehensive rural development in more than three hundred villages in various districts of Andhra Pradesh.

Championed the cause of Devadasis in 1930’s Advocated the registration of marriages under the Marriage Act which emphasises the equality of the spouses.

Led many a Satyagrah in post independent India championing the cause of the poor and downtrodden.

The Atheist Centre has also established family courts, set up a social guidance centre to provide help to women, Training of women in Panchayati Raj and empowering them has also been undertaken.