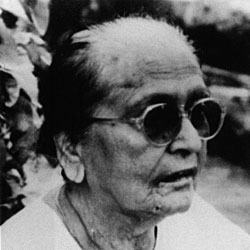 Joined the national movement at the age of 14; suffered imprisonment.Joined husband Shri Vrajanandan whom Gandhiji had picked up for the Dakshin Bharat Hindi Prachar Sabha, Madras.

Worked in the villages of Andhra Pradesh and Tamil Nadu for making women conscious of their social and national responsibilities by persuading them to join the national movement through learning Hindi. Acclaimed as one of the best workers in the field of women's movement. Lived in Wardha for two years in 1942-43 where came in contact with and worked under the guidance of Shri Jamnalal Bajaj, Acharya Vinoba Bhave and Smt. Jankidevi Bajaj. This helped her to imbibe the values, the work ethos and austere life-styles of the Ashram.

The couple came back to Bihar in 1946 where she served as the Sanchalika of Kasturba Memorial Trust, Ranchi. Established the now famous Balika Vidyapith. Even after the death of husband in 1979, she has concentrated on fulfilling her mission to educate, empower and sensitise women and make them active participants in the reformation and transformation of society.

The Education Trust was taken over by the Bihar Government in 1980 but with indomitable spirit and total commitment, Smt. Vidya Devi fought a long and agonizing legal battle with the State Government to save the integrity of the institution and succeeded in 1987 in the withdrawl of the take over.

Smt. Vidya Devi nurtures the hope of developing this institution into a Rural University for Women.