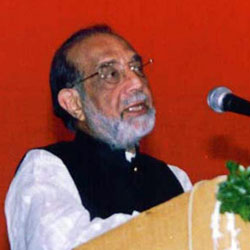 Born in Calcutta in the family of industrialists with Gandhian values. Education in Bombay, Wardha, Harvard Business School- Boston, USA. Entered the public life when only 20; was Joint Secretary- Junagadh Rajya Prajamandal, 1946-48.

Elected to the Lok Sabha in 1967 and the Rajya Sabha in 1975 and again in 1990. Was member of many important Parliamentary committees.

Was detained in prison under MISA in July, 1976; was an accused in Baroda Dynamite Case; released in March 1977.

Member of the National Executive of BJP since 1984.

Has written several articles on various issues including lectures published as booklets on "Prestroika" and "Privatisation" and other subjects.