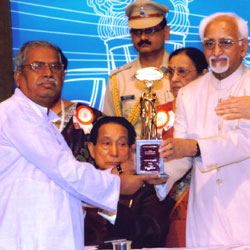 Is a dedicated, constructive Gandhian social worker, freedom fighter and Sarvodaya leader. Started working as a non-formal teacher at his own village, Kumarada. Drew inspiration from eminent Gandhian workers of Orissa. All his activities are undertaken by the Banabasi Seva Samiti founded by him.

Set up schools and vocational educational institutions for self reliance. Provided special hostels and orphanages for the children especially belonging to the ST and SC. Creches are run for the children below 3 years.

Established primary, secondary and non-formal education centres in several villages in Balliguda in Orissa. A Nutritious Food Project is also functioning catering to the needs of malnourished children, pregnant and nursing mothers.

An old age home and special homes for women who are in moral danger or are victims of exploitation or suffer from family disorganization have been established as social welfare amenities.

The impact of work represents a model prescribed by the Central Government for social welfare schemes for other States.