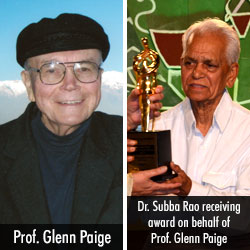 Prof. Glenn D. Paige is the Founder and Chair of the Center for Global Nonkilling (CGNK) and Professor Emeritus of Political Science, University  of  Hawaii. He was born in Brockton, Massachusetts, the son of a YMCA social worker, with early years in New Hampshire and on Cape Cod, Massachusetts.  Prof Paige’s life journey has brought him from war through inspiration by Mahatma Gandhi’s multifold contributions to work for a killing-free world. He has been encouraged by Gandhian workers in many visits to India. The mission of the Center for Global Nonkilling is to promote change toward the measurable goal of a killing-free world with infinite creativity in reverence for life. Strong Gandhian influence is seen in its effort applying the Nonkilling Spiritual, Scientific, Skill, and Artistic capabilities of humankind in globally transforming action.  Its slogans are “No More Killing!” and “Everyone can be A center for global nonkilling.” The nonkilling mission is increasingly being taken up by scholars, educators, leaders, and people across many countries.

In 1976 he first visited India to study Gandhian principles of nonviolent education at the invitation of Dr. G. Ramachandran, Vice-Chancellor of Gandhigram Rural University, followed by travels to 33 countries. This gave an opportunity to Prof Paige to supplement his study of Gandhi’s writings and thoughts with direct observation of the active role of the Shanti Sena as a disciplined force for peace and constructive village work. This study fortified Prof. Paige in his vision and confidence in the power of nonviolent principles. This was followed by his address calling for a new nonviolent political science at the XI World Congress of the International Political Science Association in Moscow in 1979. To liberate humankind from violence, Prof Paige proposed that  political science must first liberate itself from violence through five related nonviolent revolutions viz. normative, empirical, theoretical, institutional and educational. He began teaching courses on “nonviolent political alternatives” in 1978.