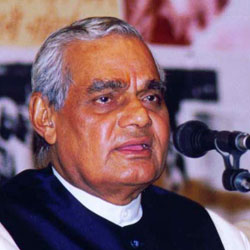 Involvement in politics began as a freedom-fighter during the Quit India Movement. Among the founding members of the Bharatiya Jana Sangh. Was first elected to the Parliament in 1957. Was leader of the Jana Sangh. Suffered confinement during Emergency. Post emergency, was the Union Minister for External Affairs in Morarji Desai's cabinet. Helped form the Bharatiya Janata Party (BJP) in 1980. Was leader of the BJP parliamentary party for various periods.Was Leader of the Opposition in the 11th Lok Sabha. In 1999, took charge as Prime Minister of India heading the National Democratic Alliance.

A veteran Parliamentarian with great oratorial skill. Served on a number of important Committees of Parliament as member and Chairman. Has been elected to the Lok Sabha nine times and to the Rajya Sabha twice.

Has many literary and journalisisic accomplishments. Edited Rashtradharma (a Hindi monthly), Panchjanya (a Hindi weekly) and the dailies Swadesh and Veer Arjun. Over 20 books of poems, reminiscences, speeches, political commentary etc. published.