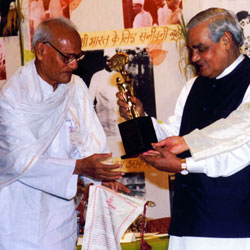 Gave up his job of lecturer in Varanasi in 1954. Renounced his paternal home and property.Got associated with Shramabharati, a voluntary organization for the propagation of the Gandhian ideology and the uplift of surrounding villages.

Provided inspiring leadership towards making Shramabharati a centre of repute throughout the country as an institution of excellence and achievement of the Gandhian traditions.

Accomplishments include: Reconstruction of surrounding villages in the spirit of Antyodaya to uplift Harijans, adivasis, backward Muslims and backward Hindus living below the poverty line ; Reconstruction of education on the lines of half-day schooling envisaged by Mahatma Gandhi; Orient workers with the ideas of Gandhiji and enthuse them to practice and preach non-violence.

An activity of far reaching consequences is Preventive Peace Action against communal and caste violence in Bihar. particularly in Bhagalpur. Formation of joint Vigilance Teams to keep watch in their areas throughout the night has become almost a people's movement.

Has motivated the rural people towards improved methods of agriculture, healthy way of bringing up children, treating common diseases with household remedies etc. Has been successful in having many villagers weaned away from the pernicious habit of drinks and intoxicants. All these ventures have not only brought about better employment to villagers but also more equitable distribution and social equality among them.