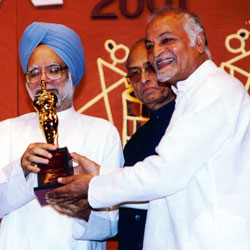 Was so much inspired by the Autobiography of Mahatma Gandhi that he gave up his Jain monk life and went to live in a Gandhi Ashram in Bodh Gaya established by Vinoba Bhave. He became a living example of both spirituality and social work.

Set off on foot from the Gandhi Samadhi in Rajghat, New Delhi to walk to Moscow, Paris, London and Washington - the four nuclear capitals - to protest against the bomb and to campaign for disarmament and peace. Met ordinary people during this 8000 mile walk as well as world leaders including Bertrand Russel and Martin Luther King.

Was invited by Canon John Collins of St. Paul's Cathedral in London him to establish the London School of Non-¬violence.Work through the London School of Non-Violence became profoundly influential in training young people to seek non-violent social change, peaceful resistance and transformation of life-style based on the principles of equality1 frugality and simplicity.

Was invited to edit "Resurgence" magazine by Rev. John Papworth and the late Dr. E.F. Schumacher, This magazine promotes the principles of "Small is Beautiful" and a life-style in harmony with the well-being of Planet Earth. Some of the most outstanding holistic thinkers of the world have contributed their innovative and radical ideas through its pages.

Established in the village of Hartland in the South West of England a local school called "The Small School" which is conducted on Gandhian principles.

Persuaded the Dartington Hall Trust (originally inspired by the ideas of Rabindranath Tagore) to establish an international college for adults on their 2000 acre estate. The outstanding quality of the teachers and the integrated interdisciplinary manner has earned the college a world-wide reputation.