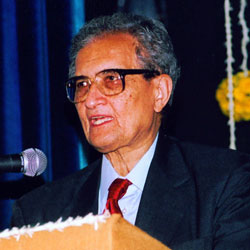 Received high-school education at St Gregory's School in Dhaka in 1941. Then studied at the Visva-Bharati University school and Presidency College, Kolkata. Moved to Trinity College, Cambridge, where earned a First Class First BA (Honours) in 1956 and then a Ph.D. in 1959.

Has taught economics at Calcutta, Jadavpur University, Delhi School of Economics, Oxford, London School of Economics, Harvard and was Master of Trinity College, Cambridge. Was appointed in 2007 as chairman of Nalanda Mentor Group to steer the execution of Nalanda University Project, which seeks to revive the ancient seat of learning at Nalanda, Bihar, India into an international university.

Is known for Welfare Economics and Human development theory. Helped develop the theory of social choice. In 1981, published Poverty and Famines: An Essay on Entitlement and Deprivation, a book in which he demonstrated that famine occurs not only from a lack of food, but from inequalities built into mechanisms for distributing food.

Had considerable influence in the formulation of the Human Development Report, published by the United Nations Development Programme. Revolutionary contribution to development economics and social indicators is the concept of 'capability' where he argues that governments should be measured against the concrete capabilities of their citizens.