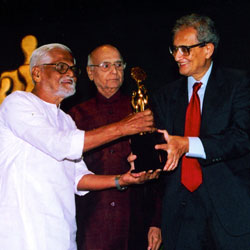 B. Sc., University of Travancore

Participated in the Quit India Movement while only a student. In 1944, organized the Trivandrum Student Settlement, an Ashram Hostel in which 35 selected college students lived and worked for the Constructive Movement.

During 1946-47, Gandhiji's fast resulting into hostilities between the Hindus and Muslims melting away motivated him to plunge into the field of constructive work. Organized many centres and conducted study courses for students and Tattwa Prachar workers as the Chief Tattwa Pracharak of the Kerala Gandhi Smarak Nidhi.

Was among the early Bhoodan Yojana workers of Kerala. Was the Chairman of the Sarva Seva Sangh in 1989.

Worked effectively in the sphere of promoting peace through Shanti Sena. These include : Combating Naxalite violence in the Kilimanoor area in 1970; Hindu-Muslim riot in and around Tellicherry; in the Bangladesh Refugee camps in 1971 with the help of the Mukthi - Bahini for creating a feeling of understanding and friendliness for India; in Punjab during tension between Sikhs and Hindus; and as part of the Kuttanad Peace Project during 1971 - 1976.

Was chosen by the Chief Minister of Kerala as the mediator to solve the Godhra-like situation developed in the village of Marad in Calicut district in 2003-04.

The work done by him during the last 60 years in the Constructive Movement is said to be remarkable in its variety, intensive in its scope and expansive in its coverage.