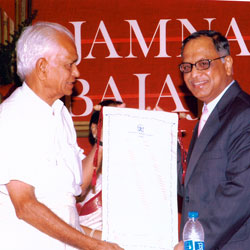 Started social work right from his student days. Became an active member of the Rashtriya Sewa Dal and started an "Adult Education Centre" in the labourers' area. Came to Delhi to work for the All India Congress Sewa Dal. Organized many training camps for Congress workers throughout the country. Led several delegations of Indian Youths to various countries.

Joined the Gandhi Peace Foundation in 1969 as its life member. Established the Mahatma Gandhi Seva Ashram at village Joura in Morena District of Madhya Pradesh to train the youth in self-help and constructive work. Was able to bring about the historic surrender of more than 600 dreaded dacoits of Chambal Ghati. This was followed by dacoits surrendering in large numbers in Uttar Pradesh and Rajasthan.

Has been honoured with several awards - Indira Gandhi Award in 2000; the Sane Guruji Individual Award in 2001; the Rajiv Gandhi Sadbhavna Award and the National Award for Communal Harmony in 2003.