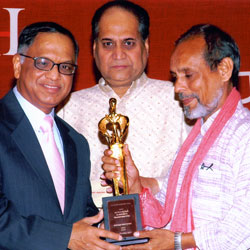 Born on 6th April, 1955 in the village Kotdwar of Uttaranchal

Quit his comfortable job as a Reader in Government P.G. College and plunged into research and development work. Set up an NGO, the Himalayan Environmental Studies and Conservation Organisation (HESCO), for need-based Technology for the mountain regions. Implemented extremely challenging projects and programmes such as "Women Technology Park" and "Technology Intervention for Mountain- Eco System".

Set about the task of checking the menace of landslides through botanical methods in 1979. The Border Roads Organization took his technical advice to check soil erosion land slides in Garhwal.

Other major interventions have been that of the use of "Lantana", a known weed, for productive purposes; technology development in the field of upgrading hundreds of water mills (traditionally called "Gharats"). Also promoted the Ecological Food Mission in Mountain where traditional crops have been revamped. Initiated WISE (Women's Initative for Self Employment).

As an Ashoka fellow, has authored over 80 research papers and 10 books dealing with sustainable development of the Himalayas through various means.

Was declared "Man of the Year" in 2002 by "The Week" Magazine. Received the Jawaharlal Nehru Award by the Indian Science Congress in 1999 and Padma Shri in 2006.