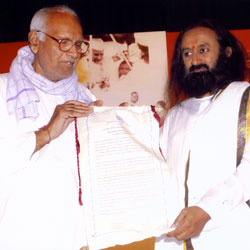 Born in a cultured Arya Samaji family of freedom fighters in Jagaramb, Ludhiana District of Punjab.

Left home after graduation and came to Sevagram. Devoted himself to wearing, propagating and selling Khadi and to welfare, hygiene and education activities in Harijan colonies. Became secretary to Shri Aryanayakam and Smt. Ashadevi Aryanayakam. Achieved expertise in the field of Nai Talim. Took over a senior post in the Directorate of Nai Talim Centre in Faridabad.

Relenquished Government service to participate actively in the Bhoodan Movement. Established the Sarvodaya Ashram in the village of Sarana, 8 kms from Pathankot. Vinobaji named it as the Prasthan Ashram. The Ashram does not receive any governmental aid. Created a blue print of the ideals of Sarvodaya.

Did exemplary work for establishing peace and harmony and assisting in rehabilitation of refugees during the Indo-Pak conflicts of 1965 and 1971. Visited fearlessly the terrorist-infested areas and persuaded people to see the right way at the time of the terrorist activities in Punjab. Many a time, had to face serious trouble, but he did not accept any governmental protection. Participated in relief work during the Bihar famine.

Has been Joint Secretary, Secretary, Managing Trustee, and President of Sarva Seva Sangh at various times. Organised international conferences of the Sarvodaya Sammelan in Sewagram, Mumbai, Sabarkantha, Akbarpur, Jaora and Indore. Recently, the National Convention of Nai Talim was held in Sevagram, which was inaugurated by the Prime Minister of the Tibetan Government in Exile, Shri S. Rinpochheji.

Main activity revolves around reaching to the people throughout the country and to public education, especially developing the virtues in social workers. Emphasis is on promoting moral and spiritual uplift, Gram Swaraj, Khadi Gramodyog and Swadeshi.