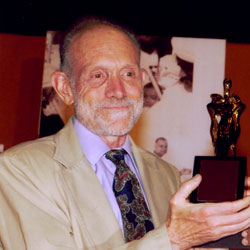 Professor Emeritus of Languages at the University of California, Berkeley. Founder and former chairperson of the University's Peace and Conflict Studies Programme. It was his contact with an Indian savant, Eknath Easwaran, and residence in the latter's Rue Mountain Centre of Meditation that he began to understand Gandhi.

Offered a course on non-violence and Gandhi to make his teaching more meaningful. The course was successful with the students. Brought together like-minded colleagues and began the long process of establishing the 'Peace and Conflict Studies Programme'. The programme has been one of the largest in North America and is now being used as a model for similar courses at some other colleges and universities.

Is the founder of Metta Centre for Non-Violence Education and Educators for Non-Violence, together with the Dalai Lama Foundation, and is now its President. Has been the moving spirit behind the 'Shanti Sena' project (now called Non-¬violent Peace Force) of which the first pilot project is at present being tried in Sri Lanka.