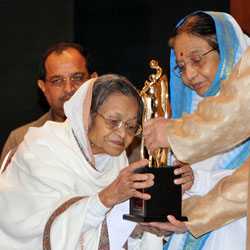 Smt Shakuntala Baideo began her social commitment early, taking part in social activities during the freedom movement, while still in school. In 1947, at the invitation of late Amalprabha Das, she joined her at the Kasturba Gandhi National Memorial Trust in Assam.

Several years of devoted service saw her deep involvement in the training of a large number of gram sevikas. As part of the Sarania Ashram, which Shakuntalaji is associated with, there are 22 Gram Seva Centres spread over the North East, serving the villagers, especially women and girls. Nai Talim, Literacy, Balbadis, Yarn spinning and Weaving (Cotton and Silk Khadi) and Prakritik Chikitsa are the main activities.

The insurgency-prone areas of the North-East have received Shakuntalaji’s soothing care for over 20 years. She was closely associated with Vinobaji, traveling into the interiors with him, interpreting his lectures from Hindi to Assamese and leading the Maitri Ashram on the Assam Arunachal border, which he founded. At the time of the Chinese aggression in 1962, Smt Baideo organized Shanti Sena activities on the international borders.

In 1973, Smt Baideo initiated Mahila Padayatra in Assam and took part in the ‘Go Hatya Nivaran’ movement in Bengal in 1978 and was arrested. During the severe communal conflagration in Assam in 2008, she toiled day and night to bring peace and harmony.

Today, at the age of 62, Smt Shakuntala Baideo continues to work 12 hour a day providing exemplary service to the cause of development and welfare of women and children.