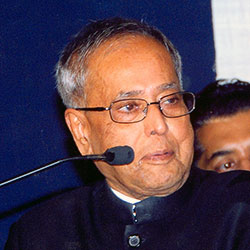 Mr. Pranab Mukherjee assumed office as the 13th President of India on July 25, 2012, crowning a political career of over five decades of exemplary service to the nation in Government as well as Parliament.

Seventy six years old, Mr. Mukherjee is a man of unparalleled experience in governance with the rare distinction of having served at different times as Foreign, Defense, Commerce and Finance Minister. A powerful orator and scholar, Mr. Mukherjee’s intellectual and political prowess as well as remarkable knowledge of international relations, financial affairs and parliamentary process are widely admired. He has been acclaimed for his role as a consensus builder on difficult national issues through his ability to forge unity amongst the diverse political parties that form part of India’s vibrant multi-party democracy.

Mr. Mukherjee acquired a Master’s degree in History and Political Science as well as a degree in Law from the University of Kolkata. He then embarked on his professional life as a college teacher and journalist. Inspired by his father’s contribution to the national movement, Mr. Mukherjee in 1969 plunged into full time public life following his election to the Upper House of the Parliament (Rajya Sabha). A prolific reader, Mr. Mukherjee has authored several books on the Indian Economy and on Nation Building. The many awards and honours conferred on him include India’s second highest civilian award, Padma Vibhusan in 2008, the Best Parliamentarian Award in 1997 and Best Administrator in India Award in 2011. He was rated one of the best five Finance Ministers of the world in 1984 according to a survey conducted by “Euro Money” Journal published from New York and was declared ‘Finance Minister of the year’ for Asia in 2010 by “Emerging Markets”, the journal of record for the World Bank and the IMF.