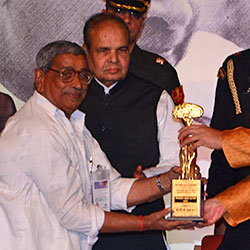 Shri G. V. Subba Rao who is the President of the Gramdhan Nirman Samithi, since his childhood days has been involved in Gandhian activities alongwith his father who was associated with the freedom movement and the Socialist Party. As a student leader Shri Subba Rao was very active in associating students with social work based on Gandhi-Vinoba’s ideologies.

Shri Subba Rao joined the Bhoodan Movement of Acharya Vinoba Bhave. In 1954, he was asked by the Hyderabad State Bhoodan Yagna Samiti to work in Nagarkurnool area of Mahabubnagar District, in collecting Bhoodan from the landlords and distributing to the landless people in the same village. In the year 1956, Vinobaji toured (padyatra) for 30 days in the Mahabubnagar district. He worked tirelessly for the Bhoodan movement. Shri Subba Rao collected 20,000 acres in Mahabubnagar and 12,000 acres of land in Hyderabad in bhoodan. He met every donor and distributed land according to the donor’s selection and personally got land transfer patta from the government to the receiver of the donation. People recognize him as “Bhoodan Subbarao”.

After Bhoodan work, Khadi production was the first activity which Shri Subba Rao had undertaken to employ the villagers as spinners and weavers. He has specialized in khadi towels and blankets which have become popular even in other States. Shri Subba Rao’s khadi activity is associated with the KVIC only for certification and not for subsidy and has received several awards for this work, Gramdan Nirman Samithi Set up Ambar Charka units and weaving centres. Shri Subba Rao participated in Khadi exhibitions to promote khadi sale.

In 1991, a Residential School “Sarvodaya Challenged Children Residential School” was set up for the physically handicapped and hearing impaired children. Currently there are 60 students viz. 31 boya and 29 girls. This program is supported by the Ministry of Social Justice and Empowerment. The school has helped the children to stand on their own feet with self confidence and self respect. Most of them belong to scheduled castes and scheduled tribes. The children are bright and ambitious. Quite a few students have brought laurels to the school.

Shri Subba Rao’s personal interest is seen in every activity. His approach is personal and maintains continuous contacts. This has given continuity of life to his constructive work. Shri Subba Rao is a unique combination of a Constructive Worker and Satyagrahi.

Shri G. V. Subba Rao over the years has built something precious and unique. He truly is a functioning and living disciple of Gandhi.