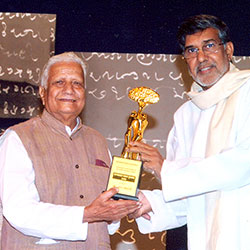 Shri Surendra Koulagi is a staunch follower of Mahatma Gandhi, Vinoba Bhave and Jayaprakash Narayan. After working with Jayaprakash Narayan as his personal assistant from 1954 to 1959 in Bihar, he returned to work in Karnataka and selected Melkote area in Mandya district, a region that was then very poor and backward.

Shri. Koulagi is the founder of Janapada Seva Trust a voluntary social service organization established in 1960. Inspired by the Gandhian ideal of sarvodaya, the Trust has been striving for social and economic elevation of the weaker section of society. Shri. Koulagi worked for Bhoodan movement of Acharya Vinoba Bhave. He conducted Sevadal in Melkote since 1959 for several years and also participated in many pro people movements.