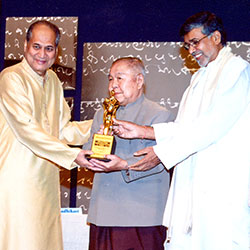 Mr. Sulak Sivaraksa is one of the founders of the International Network of Engaged Buddhists (INEB), which was established in 1989 with leading Buddhists. Besides, he is the initiator of a number of social, humanitarian, ecological and spiritual movements.

Mr. Sulak Sivaraksa was educated in Bangkok at the University of Wales, Lampeter, where he is now an honorary fellow in Buddhism. Soon after his return to Thailand, he directed his energies towards the development of sustainable models for a rapidly changing economic and social environment. In 1963, Mr. Sulak Sivaraksa founded and edited the Social Science Review – a journal that became the most influential intellectual outlet in the country. It was instrumental in awakening student awareness that eventually led to the overthrow of the military regime in 1973.

Mr. Sivaraksa's commitment to peace was strengthened during the military coup in 1976 when he was forced into exile for two years. Since then he has been championing non-violence in war-torn and repressed countries. His devotion to peace and non-violence[ is demonstrated by his leadership and membership in international peace organization like Buddhist Peace Fellowship, Peace Brigade International and Gandhi Peace Foundation. He is councillor of the World Future Council.