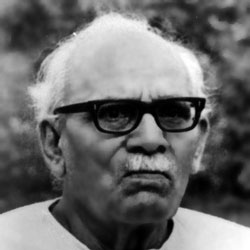 A veteran Gandhian and a freedom fighter. Started as a teacher. After coming in contact with Gandhiji in 1925, joined the Sabarmati Ashram as co-editor in Hindi Navjivan. Moved to Wardha in 1935 and was Hindi teacher, Secretary and Principal of Mahila Ashram. Got involved in Nai Talim work. Suffered imprisonment for 25 months.

Agitated for people's rights and responsible government in the princely state of Barwani. Worked actively to establish communal harmony following the riots after independence. Was appointed the first Education Minister of Madhya Bharat.

For 70 years, had dedicated himself to the promotion and propagation of Gandhiji's constructive programme. Popularly known as “Gandhi of Nimar”, guided and inspired a whole generation of Gandhian and Sarvodaya workers and institutions in Madhya Pradesh.

Established the Gram Bharati Ashram in Tavlai, a village in the Adivasi region of Dhar District of Madhya Pradesh. Has been involved in developing a Gandhian, decentralized, village-oriented, self-sufficient community.

Made an important contribution in adding to and enriching Hindi literature about Gandhian Philosophy, Sarvodaya, Child Education and Social Development by his translation of over 125 books from Gujarati to Hindi.

Started the first movement to protest against raising the height of Narmada dam.

Has been honoured with numerous awards including ‘Sahitya Chakravarti' , ‘Sahitya Vachaspati' of Hindi Sammelan, and the ‘Balamitra Gold Medal'.