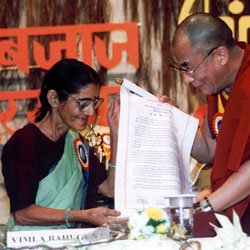 Was a Sarvodaya worker and participated in the Bhoodan Movement in Bihar in 1953-55.

After marriage to Shri Sunderlal Bahuguna, she continued to live in the villages as a householder, collecting wood from the forests and attending to the household chores, as also an activist educating children and inculcating a sense of self-confidence among the women.

Started a drive for prohibition and went to jail. Inspired the common village women to join the Chipko movement and the prohibition campaign. No parallel to her successful effort to bring in thousands of women a poor and inhospitable area like Tehri Garhwal into the people's movement. Established the Parvatiya Paryavaran Saurakshan Samiti (Hilly Area Environment Protection Committee) to carry out these activities.

Smt. Bahuguna has inspired a large number of workers to come out in public. She also engaged in activities to inspire confidence among the orphan and deserted women. Women who had been neglected or deserted by the families were taught by her to become self-reliant. Even today, there is a large number of such women working alongwith her.

Smt. Bahuguna is a woman of very few wants. She took assistance from her institution only for hr livelihood. The Committee does not believe in obtaining Government grants.

Took the lead in rehabilitation efforts in the earthquake of 1992,

It is difficult to imagine that a frail 28 kg woman i.e. Smt. Bahuguna works for 19 hours a day in various activities such as agriculture, cow service, basis education, construction of huts, duties in the house. The secret of her success is her dedication and faith. Her determination has triumphed over her bodily infirmities.Received the Kheti Award by Indian Council of Agricultural Research in 1975 during International Women's Year.