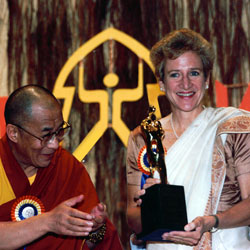 An American, born in Wisconsin as Sally Slack.

Settled in Washington in 1968 identifying with the ideals of the Self-Revelation Church of Absolute Monism and the Gandhi Memorial Foundation. Taught for 5 years in Maryland in the poorest sections of the District of Columbia.

Is Administrative President, Mahatma Gandhi Memorial Foundation and the Director of the Gandhi Memorial Centre. Organizes and directs a group of regular workers including residents of the Ashram who maintain its activities and services. The Centre is principally concerned with the propagation of Gandhian values and the teaching of Mahatma Gandhi's thoughts and activities for non-violence, peace and harmony between nations. It is supported entirely by voluntary contributions.

Organized for the first time in the United States a Correspondence Course on the life and message of Mahatma Gandhi leading to a certificate from the Gujarat Vidyapith, Ahmedabad. Students from as far away as Hungary and South Africa have completed the course. Her addresses each year for Gandhi Jayanti and Gandhi Maha Samadhi have been presented on New York's “Bharat Vani Radio”.The Gandhi Centre's programme on October 2nd is taped by the “Voice of America” for broadcast in India.

Journeyed through India in 1979-80 and visited Institutions established or inspired by Mahatma Gandhi. Subsequently, invited to speak on the work of the Centre and the Foundation by theGovernment and Nationalised Banks, Gandhi Ashrams, Gujarat Vidyapith; also at Sevagram and Gandhigram in Tamil Nadu.

Is the author of several books and a prolific writer of articles in many distinguished journals. Among the most important of her books are:' Frontiers of the spirit' (1982) and ‘Mahatma Gandhi: An American Profile' (1987).

Received an Award as “Ambassador of Indian Philosophy and Ideals of Mahatma Gandhi in U.S.A.” from the Association of Indian in America (Washington 1980). One of the two Americans to receive the Special Friend of India Award and a citation for fostering the cultural and spiritual heritage of India in North America.