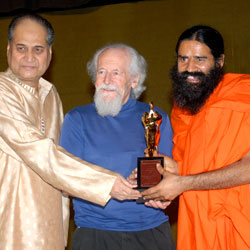 Father Dougherty’s peace and justice work began dramatically in 1970, when he became a campus minister at Eastern Michigan University in Michigan.

The Vietnam War was on. Many young men on the campus were demonstrating against it. Moved by this, he began to see the systemic violence not only of that war, but of U.S. foreign policy with its many military interventions, the issues of poverty and wealth, greed, and consumerism in the US. It changed his life.

During the summer of 1972 he went to California to learn about the issue of poor farmer workers. He stood in solidarity with the United Farm workers on the strike line.

That was where he first seriously began to understand nonviolence and its power.

In 1993, Father Dougherty and others formed the Michigan Peace Team or MPT.

Father Dougherty is one of the original “non-violence” trainers, and continues in this role. MPT has conducted many workshops on non-violence training, for diverse groups of people.

Father Dougherty is an outstanding person committed to a peaceful and just world. Over the years he has gone to jail several times, primarily against the madness of nuclear weapons and risked his life in war and conflict zones. In the US, Father Dougherty is known as the conscience keeper and one of the foremost Gandhians of the North American Continent.