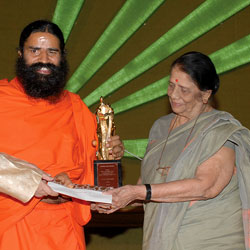 Dr. Jaya Arunachalam is the President of Working Women’s Forum (WWF), a social organization initiated in 1978 to develop the human resource potential of poor women workers. The forum which started with 800 women, is now a social movement of over 11 lakh women, spread over more than 5000 villages and slums. The forum’s success lies in its innovative attempt to integrate poor women in its institutional framework, using them as an effective delivery mechanism to reach other poor women extensively.

Dr. Arunachalam has promoted many Forums and Development organizations for the socio-economic uplift of women. She has led several delegations and marches demanding effective implementation of economic programmes for poor women workers in the unorganized sector.

Working Women’s Forum is a multi-pronged initiative which helps the Indian poor women to face the onslaught of globalization. Currently, the Forum’s initiative is to transfer this strategy of pro-poor advocacy to other NGOs through orientation.

The Forum’s initiative has been very successful. The system of micro-credit has benefited hundreds of thousands of poor women in India that were without hope of a livable life. The Forum focused its attention to fight poverty, on the struggles of poor women to fight for land, for housing rights as well as for reproductive rights concerning the number of children they want.

At present, she is establishing an International grassroots network among women called the ‘Grassroots Organizations Operating Together in Sisterhood’ (GROOTS) network.