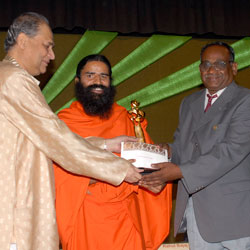 By this system, Shri Masagi and his team have recharged more than 1000 tube wells with their direct intervention and it is estimated that more than 70,000 have been recharged indirectly. The system has become so popular that several tens of thousands of farmers have already replicated the process successfully.

Shri Masagi is now trying to reach out to the corporate world. Companies which were spending Rs.1.5 lakh on purchasing water, were convinced to invest Rs.18 lakh and go in for a permanent solution. They are now water self-sufficient.

The water literacy campaign has reached 1.5 million people with 1000 programmes across 8 states in India with Rs. 380 million spent on ground water recharging. Shri Ayyappa Masagi is known as Doctor of Dry Borewell, whose mission is to strike a balance between water usage and water replenishment through transforming communities into water warriors.