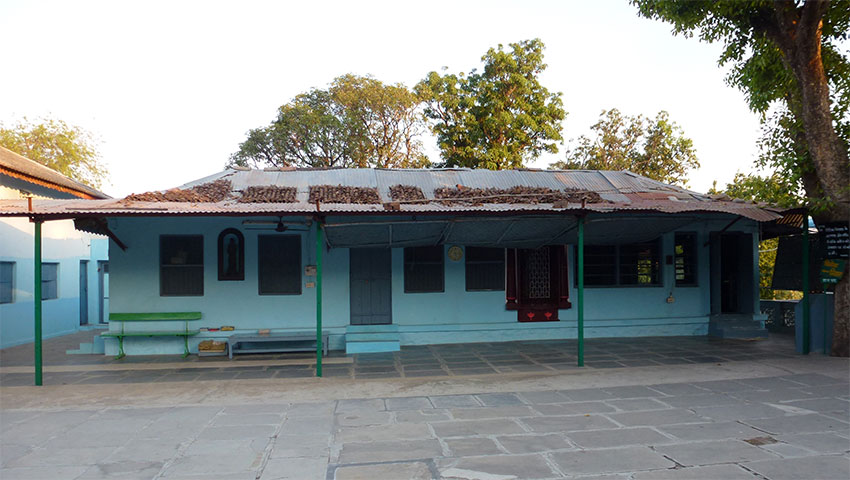 Vinoba Bhave came to Wardha in 1921 to start a Satyagraha Ashram on the lines of one at Ahmedabad. Jamnalalji had constructed a bungalow at the bank of Dham river at Paunar (9 kms East of Wardha and 6 kms away from Sevagram) for occasional rest during the summer vacation. It was known as Lal Bungalow. Taking into consideration Vinobaji's poor health, Gandhiji advised him to go to a hill station. Vinoba preferred Paunar and informed Gandhi that he found his hill station. Soon he was shifted to Lal Bungalow where Vinobaji set up his Paunar Ashram in1938. In between 1921 and 1938, Vinobaji was mainly observing Satyagrahas and doing spiritual work. During this period Vinobaji also led the Zhanda (Flag) Satyagraha in Nagpur, initiated work of Gram Seva Mandal, Kanya Ashram, educated the girls and women, observed Satyagraha at Vaikom in Kerala for allowing entry of dalits in the temples, translated the Bhagavad Gita verses into Marathi, and extensively gave talks on the Gita (Gita Pravachan) to the people and also to the jail inmates during his imprisonment in Dhule Jail.

Paunar (Pravarpur) was the capital of Vakataka dynasty during the reign of King Pravarsena. During excavation for construction of the Ashram, many sculptures and idols were found which are restored and displayed at the ashram for public view. Around 1500 year old sculptures of Ganga, Ram-Bharat Bhet (union) and other numerous sculptures depicting the scenes of Ramayana and Mahabharata can be seen at Ashram. The Paunar Ashram's temple is claimed to be the first and the only temple with an idol of Ram-Bharat.

Brahma Vidya Mandir is located within the premises of Paunar Ashram. This was established by Vinoba Bhave in 1959. It is now run by women from different states of India for common spiritual attainment. The women live a deeply contemplative life by contributing to the cause of the society. The women are actively involved in rishi kheti (earning livelihood from farming with simple, inexpensive tools, without the help of bullocks that are within the reach of the poor), spinning, manual labour and other works related to the management of the Ashram.